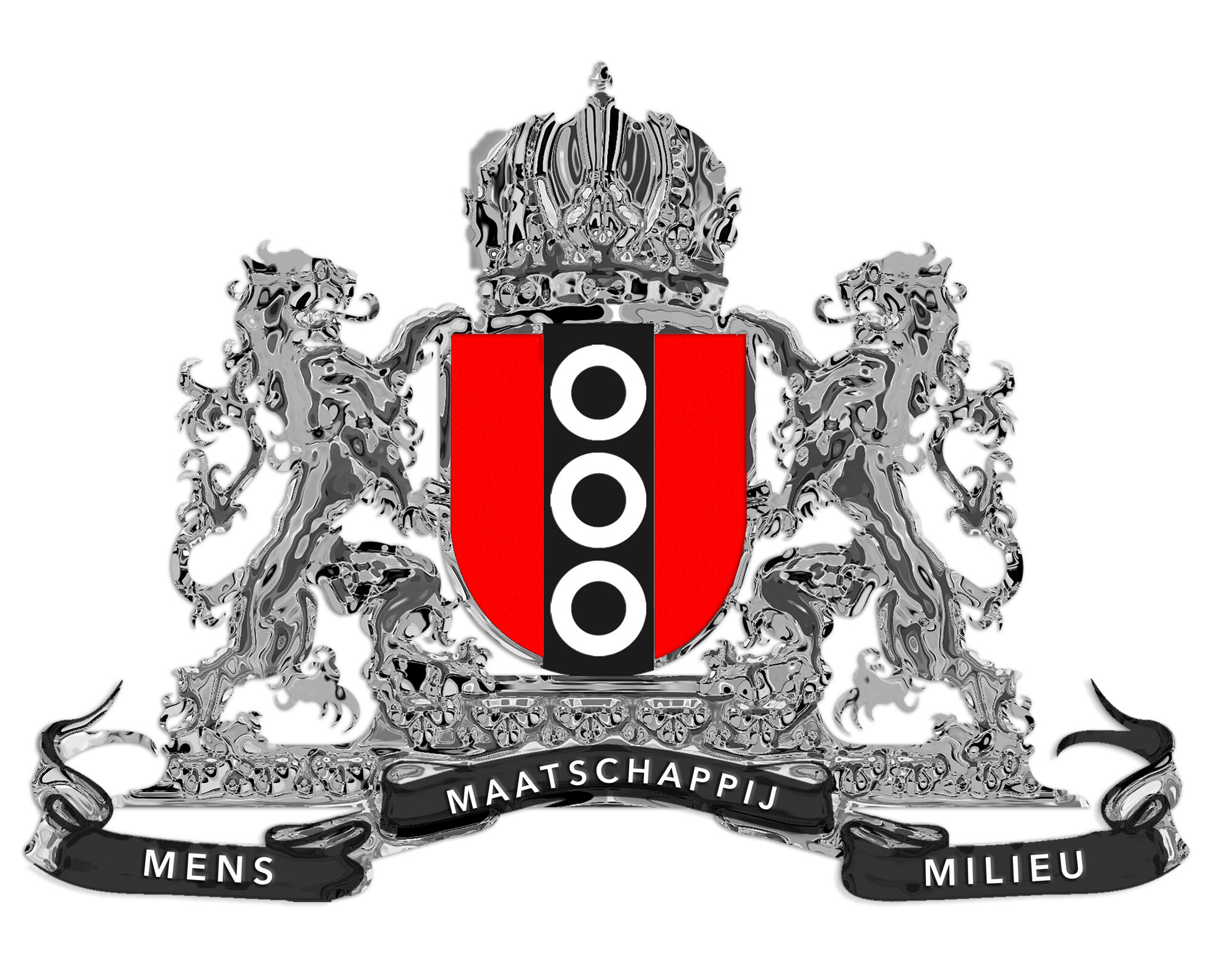 ANDSTERDAM is a public art gift to the inhabitants, human and non-human, of Amsterdam. This art gift is offered by Gemeente Nieuwe IJssel.

ANDSTERDAM is developed for Gemeente Nieuwe IJssel by Johannes Bongers in 2021. Bongers is a conceptual artist and artistic director of Boolean Works.

ANDSTERDAM is best understood as Erweiterte Kunst, the freedom practice of the artist Joseph Beuys and ANDSTERDAM is dedicated to Beuys on the 100th anniversary of his birth.

Credits:
The work of philosopher and feminist theoretician Rosi Braidotti is a great source of inspiration.Steps to an Ecology of Mind is a book by anthropologist and cyberneticist Gregory Bateson from 1972.The Three Ecologies is a concept of Félix Guattari from his 1989 book with the same title. Guattari was psychoanalyst, social philosopher and coined the term ecosophy.

ANDSTERDAM is an invitation for all inhabitants of Gemeente Amsterdam and beyond to participate in an ecological identity experiment.

After I Amsterdam discontinued end of 2018 due to changes in the political ideology and marketing at the City Council of Gemeente Amsterdam, we introduce ANDSTERDAM as the future imagination of Amsterdam. Not an identity of being, but an identity of becoming.

The AND in ANDSTERDAM represents one of the three Boolean operators of Boolean logic. AND is the operator that connects and affirms. The two other operators are OR and NOT. Boolean logic is credited for laying the foundation of the information age.

The aim of ANDSTERDAM as an identity experiment is to rethink Amsterdam as a time and space for the ever changing ways of co-existing of the mind, the social and the environment. ANDSTERDAM is not the bustling city with its rich and dubious history and great splendor that attracts tourists. ANDSTERDAM is a catchment area where individual people create and care about their ideas and share them, where individuals and groups interact over a limitless variety of social, political and cultural subjects and ANDSTERDAM is the living environment where all organisms, human and non-human, co-exist. These three domains, the individual mind, embrained and embodied in the world, the social as an ever changing and mutating interaction and the living and non-living environment, these three spheres form the three ecologies.

The identity experiment ANDSTERDAM focuses not on just one of these ecologies, today the ecology of the environment gets all attention, but on the coherence between all three ecologies and the ways they affect each other. The future of Amsterdam - including all organisms - depends on this coherence and interchange in times where all three ecologies, the mind and ideas, the social and the environment suffer under the same regime, are homogenised, loosing vitality and diversity. 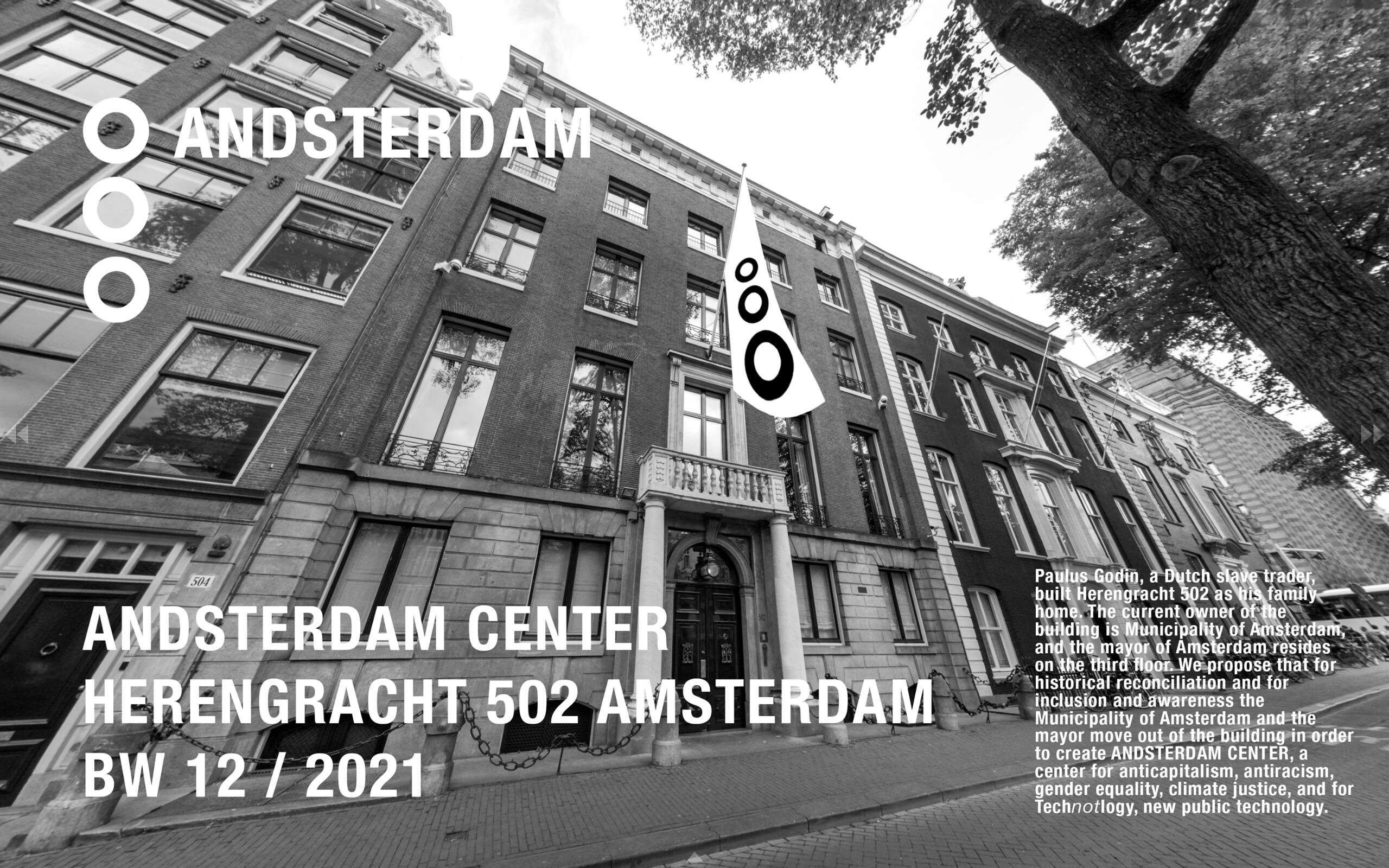 THE STATE OF AFFAIRS...
Each niche in the human mind, every organism, in social mass media, politics and through societies, in the homes, villages, cities, in the ponds nearby, the lakes and seas all over the world suffer under the regime of advanced capitalism. Each new moment new expulsions blob more exotic, cruel and detached. In the time period between Beuys, Bateson and Guattari in the 60s, 70s and 80s and today, capitalism evolved into hyper-capitalism. Technology captured, compressed and accelerated the archaic human dimensions and penetrated all domains. The mind is bombarded and captured and increasingly suffers from sameness. The social is surveilled, neglected, hijacked and attacked by social mass media technology, further atomising and isolating the individual from collective resistance. And the environment, the mi-lieu, is more then ever isolated from what it is: connected to the organism. Organism and environment is one unit. Destroying one part is destroying the whole.
Separating the environment from the organism (thank you science and Enlightenment) is a misunderstanding due to ignorance and human self-overestimation. Current cascade of catastrophic crises is the result of this misunderstanding.

...THAT LEADS US INTO
The environmental crises of global warming get all attention, understandably due to the horrific consequences especially for those who did not contribute to this tremendous exhaustion. And who now lack the means to protect themselves against it.

Remember, though, most of us started to care about the environment after Earth screams and hits back on us.

The future of all living beings is not secured and will certainly not be prosperous when the attention persistently (and almost obsessively) is on the ecology of the environment. And thus leaving the crises in the ecology of mind and the social ecology out of the equation.

Human beings (the 10% of the Western world) have not just over-exploited earth and its various atmospheres but now lay all future dreams in the hands of technology. We reduce the human mind to the brain, homogenise the human imagination, neglect the uniqueness and vulnerability of human subjectivity, oppress the differences between individuals to promote the identity of the majority, and accept and contribute collectively to the exploitation and pollution of the social environment. Homogenisation and pollution leads to further social and economic inequality, systemic and deep flat racism, democratic decay, the epistemological crisis of knowledge and truth, conflict driven social interaction, isolation, depression and mental disorder, and the fundamental inequality expressed through housing, care, and education policies. Animals and other living organisms are merely proteins and are industrially kept, killed, packed and commodified. And we keep allowing tech to transfer personal and public interest to private property. In cities and urban areas like Gemeente Amsterdam, the mental and social disturbances and economic expulsions are deeply connected.

(MAYBE THE MIND IS MOST VULNERABLE)
The mind, the social and the environment are affected by the same excessive forces of advanced capitalism. By treating the three ecologies separately, each with specific dynamics and unique crises, supercharged by the cycles and atomisation of mass media, will keep the processes and feedback between the ecologies unnoticed, potentiality unproductive and the status quo intact.

But maybe the ecology of the mind needs extra attention. This vital source and processor of ideas, peace and change, is extremely vulnerable, especially under the regime of social mass media technology. The mind is losing vitality and agency, affecting the rich flow of ideas, not just mentally but also through our body, in the interaction with others and the outside world.

AND ART AND ARTISTS...
Art, artists and art institutions should stand up and collect imagination and energy, artistically and politically, to resist the dominant forces that feed the oppression - tech, state - and should no longer participate in and contribute to the entertainment and sedation of the minds. Amsterdam with its great variety of artists, art museums and galeries is the best field of production for ANDSTERDAM. 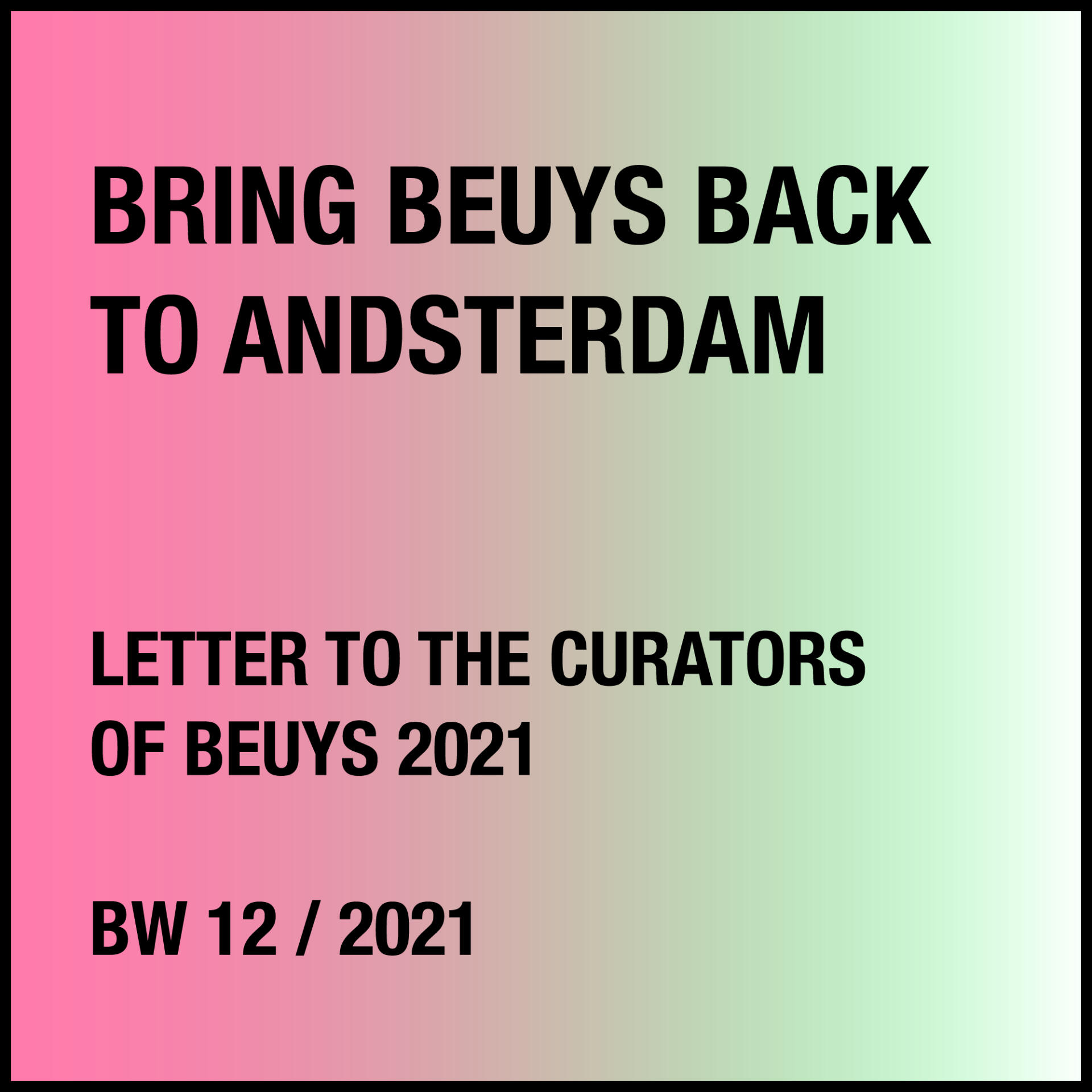 IMAGINING AMSTERDAM AFTER 'I Amsterdam'

“I amsterdam stands for individualism while we want a city which stands for solidarity and diversity,” said Femke Roosma, leader of the GroenLinks group on the city council. “In addition, the slogan reduces the city to the backdrop of a marketing story.”

ANDSTERDAM as identity concept is the complete inverse of I Amsterdam: during the 0's and 10's Amsterdam was promoted as a Self-producing machine. In hyper-capitalism and neoliberalist politics the Self (I) equals the consumer and the city is the marketplace of desire. Modern and contemporary art, the center of the I AMsterdam campaign was in the museum area, is a non-critical and integral part of this structure.

I AMSTERDAM discontinued after the change in the socio-political-marketing climate. With the dissociation from I AMSTERDAM, distancing itself from neo-liberal city-marketing, it is challenging to think about a new concept. A concept for a new identity, aspirational in connecting the hidden dots, inherently self-protected against capture by capitalism and vital to not end up as an ideological surface of urban life.

SURPRISE
We noticed, to our surprise, Amsterdam & partners continued the I Amsterdam marketing campaign, signage and ideology. No longer in your face but still accessible for the general public. Removed from the Museumplein now present online via I Amsterdam, throughout the city and its suburbs and by an I Amsterdam shop near CS. Amsterdam & partners didn't stop promoting Amsterdam as 'I Amsterdam' to the Amsterdam inhabitants and foreign visitors to increase international tourism.

A clear example of the deep interconnection of identity and ideology.

ANDSTERDAM is the identity of becoming

ANDSTERDAM is a conceptual bricolage.

1. AND, a Boolean operator
ANDSTERDAM pivots around the Boolean operator AND. AND OR NOT are the three logical operators of Boolean logic. Boolean logic originated from the 19th-century mathematician George Boole, and laid the foundation for the digital circuit in the 1940's and hence, for the information age. Boolean logic directs the algebraic rules behind each and every computer calculation leading to TRUE or FALSE, 1 or 0.

AND is the popular Boolean operator because it is easy to understand and because in Boolean logic it represents connection. AND makes TRUE what A shares with B. In ANDSTERDAM, AND organises the process of coherence between the three ecologies: the mind, the social and the environment.

3.
OOO, the three ecologies
The three OOO's represent the three ecologies, three different but related modes of belonging. ANDSTERDAM invites to reinterpret, rethink and connect these modes of belonging. The individual mind creates, shares and develops ideas and seeks meaning, the social is constantly mutating for individuals and groups to build a save and expressive community and the environment and the earth is where it all starts, where we all belong and from which we cannot tear ourselves apart.

4.
AND the Lions...
The Lions in the heraldry of the coat of arms of ANDSTERDAM represent Zoë, all living organisms. The lions carry the shield of the three ecologies. We've not yet decided to redesign the animal species or gender type of the two Lions. 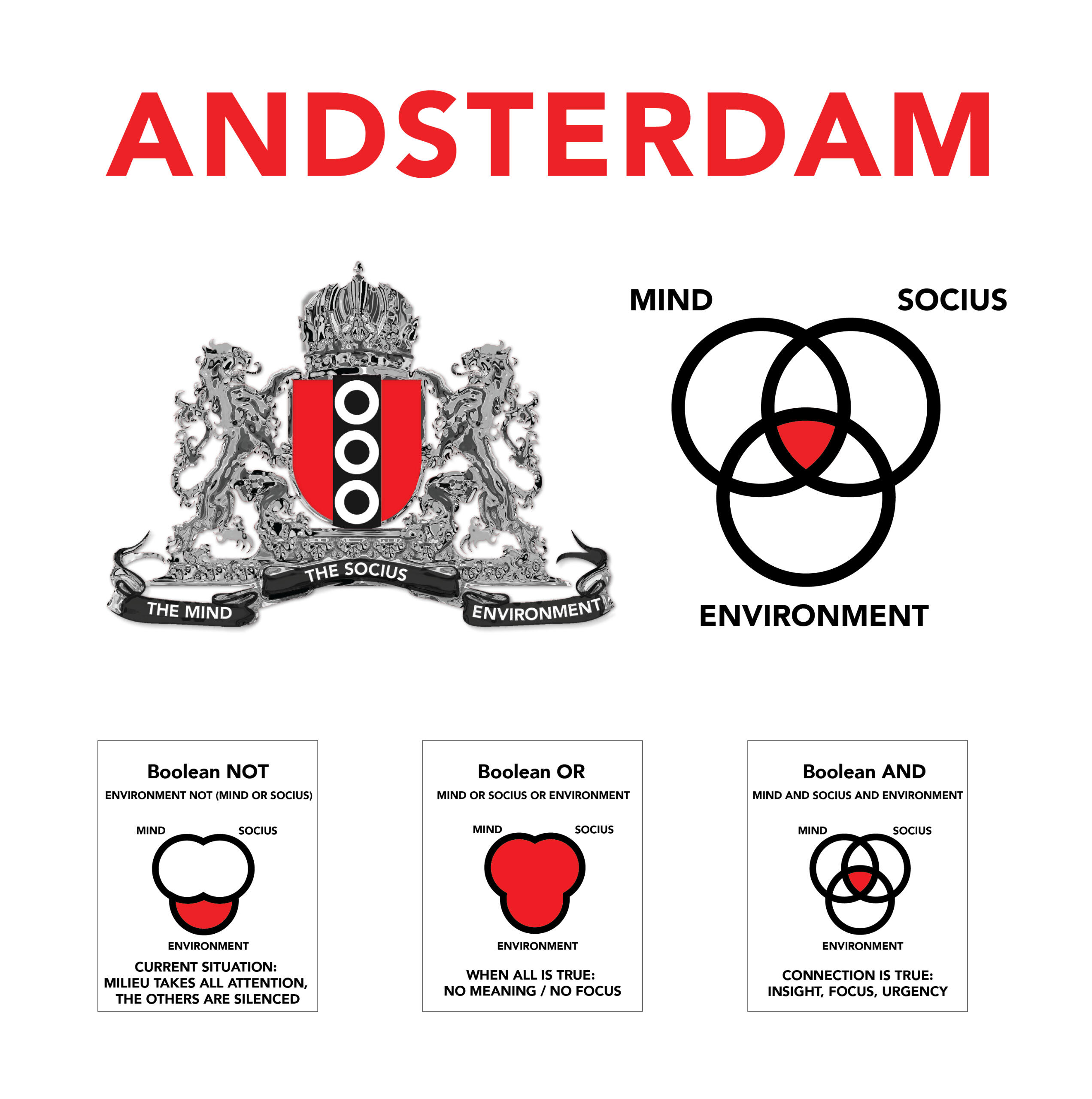 Not being but becoming

ANDSTERDAM is the eco-logic rationale for an advanced identity of Amsterdam. ANDSTERDAM is different from identity in commerce and identity politics: ANDSTERDAM is not an identity of being, of to be, of I am, of you need to be, or you'de better say x. ANDSTERDAM is an identity experiment of becoming. Becoming, the coherence between the three ecologies that is always changing, adapting, awakening, reinventing and never static. Always in a state of change to keep protected against ideological capture and homogenisation.

The Municipality of Amsterdam, the city, all its inhabitants, all organisms, all objects and ideas are connected in ANDSTERDAM in an experimental ecological identity of becoming.

October 2021
The concept ANDSTERDAM is offered to B&W of Gemeente Amsterdam including press releases. After this gift, in the early stage of ANDSTERDAM, we collect responses, ideas and critique that hopefully add new dimensions and insights about ANDSTERDAM. Please contact us.

ANDSTERDAM is stationed at GROND, KNSM-laan 708 in Amsterdam and will be officially launched early 2022. ANDSTERDAM avoids social mass media.

December 13, 2021
We developed BRING BEUYS BACK TO ANDSTERDAM to celebrate the 100th year of birth of Joseph Beuys (1921-1986) in Amsterdam. Here's a letter to the German artistic directors and curator of Beuys 2021. 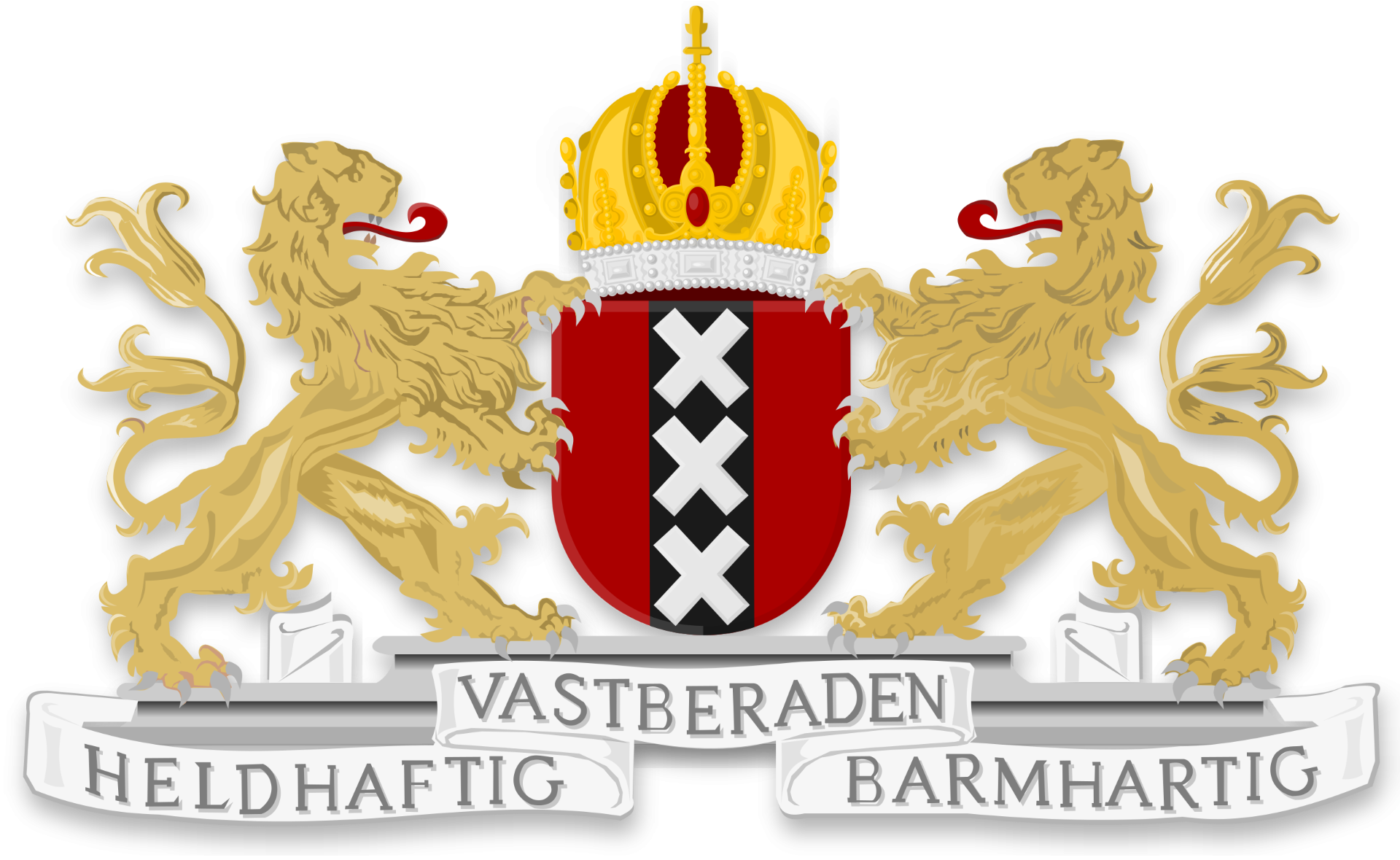 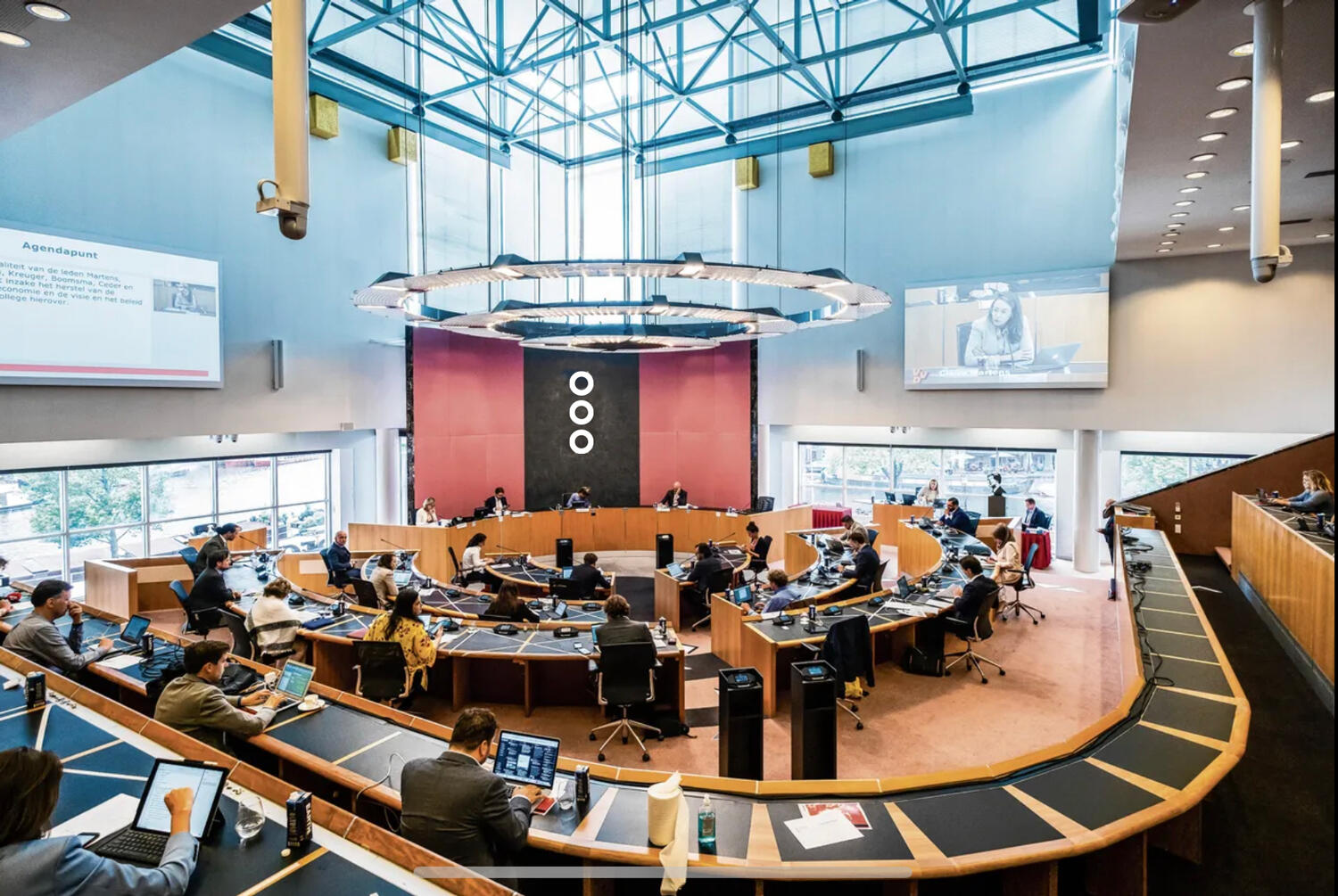 The city council of ANDSTERDAM 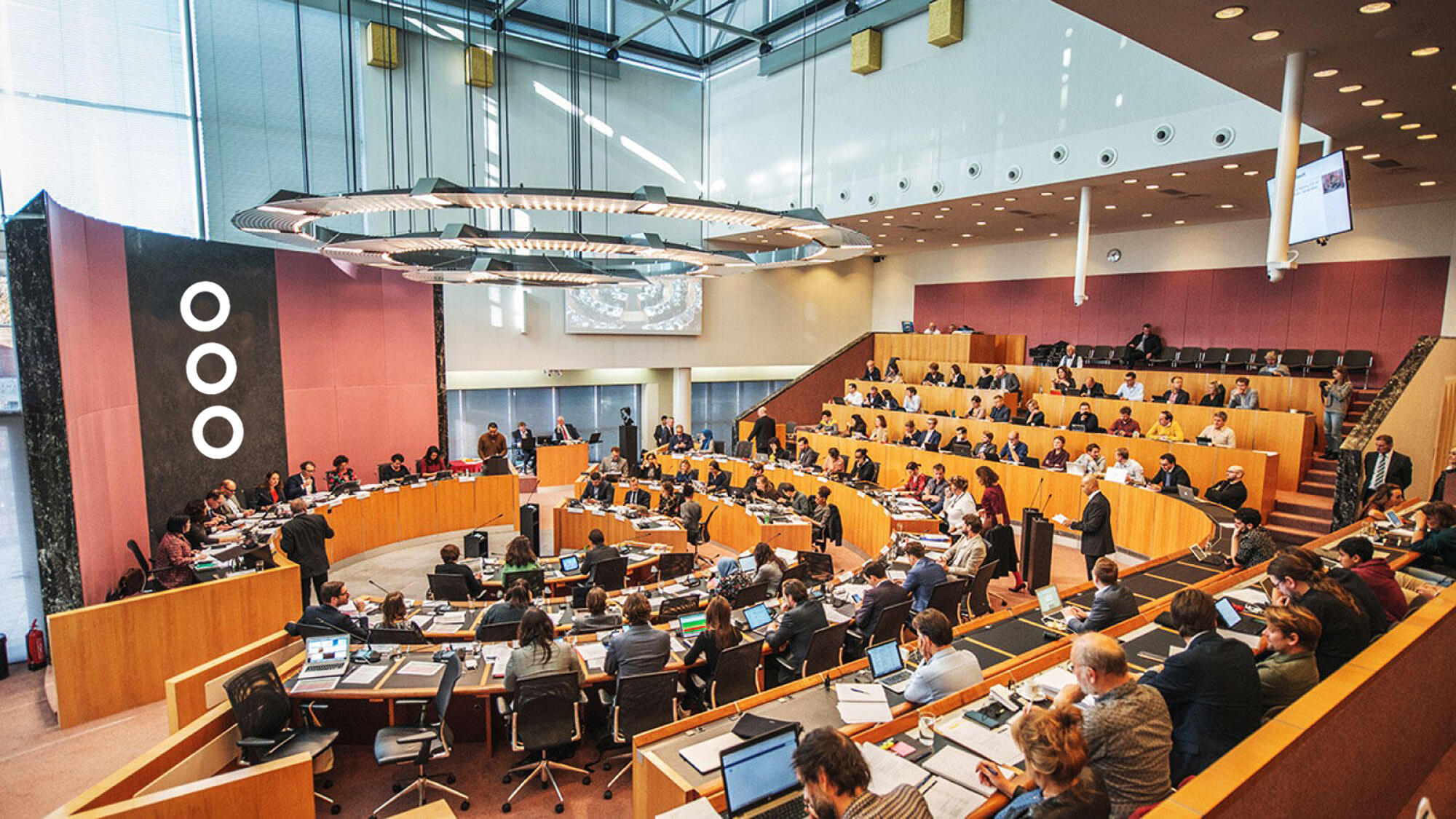 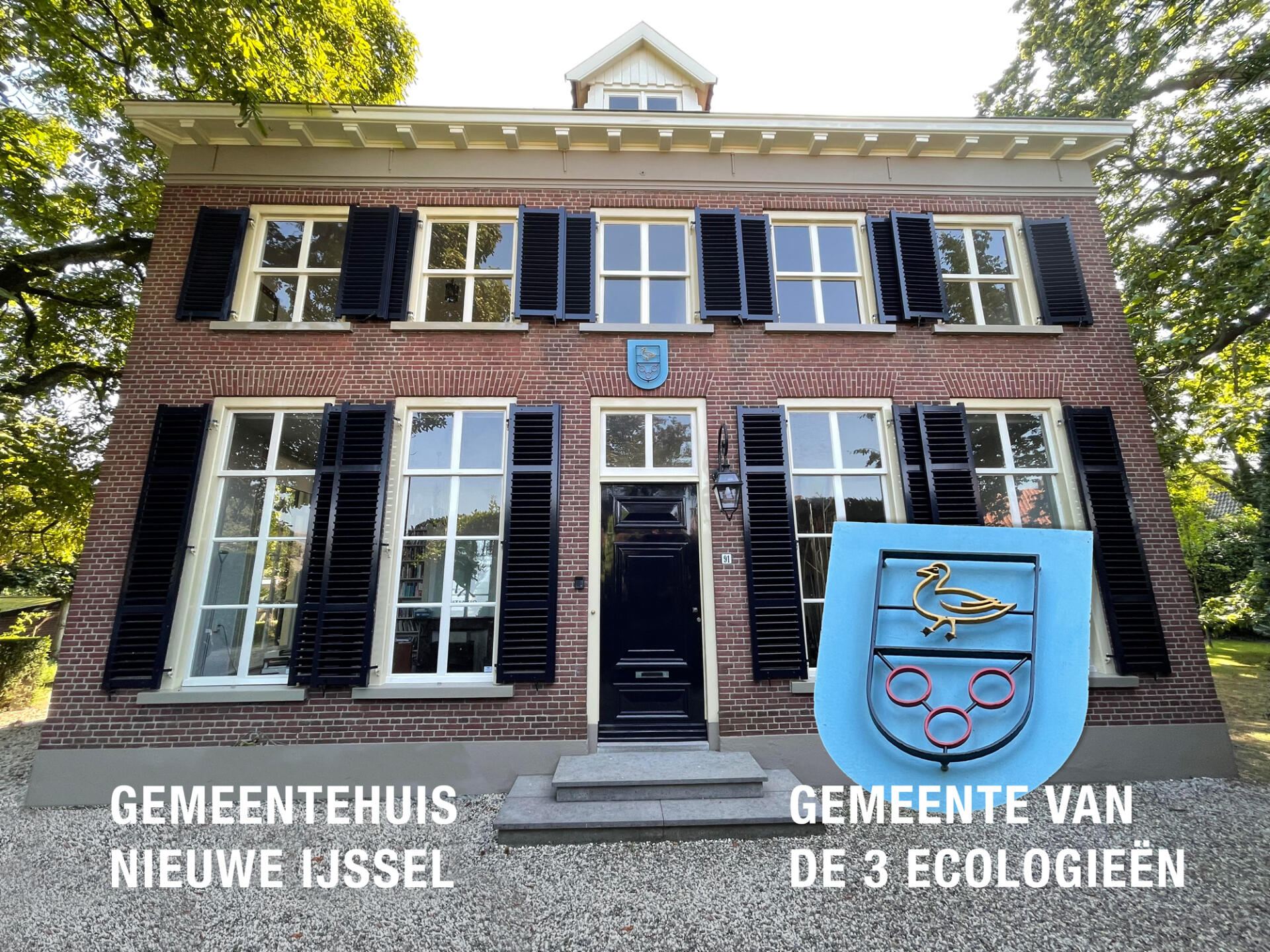 The town hall of the imaginary Gemeente Nieuwe IJssel we founded end of 2019. The building carries the original coat of arms with three OOO's, the three ecologies + the gooze. The town hall once belonged to Gemeente Gendringen which today is part of Gemeente Oude IJsselstreek in The Achterhoek in The Netherlands.

ANDSTERDAM is located at KNSM-laan 708, Amsterdam. To keep you posted, subscribe to our updates. Or send an email johannes@fazzination.com.

We keep you posted!